Generating Components Can Be Lowered Down The Tower

Generating Components Can Be Lowered Down The Tower

The illustrated wind turbine drive has a rated power of 2.0MW.  NWG has received third party validation of the design from 65kW to 7.5MW.  The diversity of the drive is evidence of its eloquent yet simple design.

The engine features a steel wheel connected directly to the wind turbine main shaft.  The steel wheel drives multiple generators via output shafts.  The output shafts are coated with proprietary polyurethane.  The shafts are directly coupled by friction to the drive wheel.

One purpose of the new drive is to provide wind turbines the ability to absorb sudden wind gusts.  The friction drive will filter torque and only allow the pre-set torque to be transmitted to the generators.  When the torque exceeds the pre-set limit, the output shafts “slip”.  This protection feature is instantaneous but does not take place unless an overload occurs.  The inertia stored in the blades during the wind gust or over speed is ultimately recovered as useful energy once the gust has passed.  Several other features enhance the appeal of the friction drive.

The 2.0MW unit has 8 output shafts, 4 on either side of the steel drive wheel.  Each output shaft is controlled independent to the other.  That means at a low wind speed of 3 m/s the first generator engages, operating at its maximum efficiency point until the wind speed increases beyond its rated power and then the second engages, then the third, and then the fourth. This leads to greater operating efficiencies.  If for example one of the generators should fail, the others can maintain operation until the repair can be made, limiting downtime.

The design also features an internal crane.  Each of the output shafts and generators are able to be hoisted down the center of the tower, eliminating the need for an external crane for repairs or replacements.

New World Generation is co-developing an electrical energy storage system.  The first portion of the system is compression. Air is compressed, with the heat of compression added back in, then stored in a pressured vessel.  The second portion of the system is the re-generation portion. The entire purpose of  re-generation is to recover the energy in the compression process and harvest the waste energy.  This is being done with a proprietary air motor.   The engineering team is focusing on maximizing the amount of energy out of a stream of compressed air to then run a generator.

The above system is undergoing performance testing and validation.  The fundamental purpose of energy storage is to move energy.  This system will not only move energy, but to move it efficiently.

The value proposition of the system will focus on the following:

In 2007, New World Generation purchased a used gearbox driven wind turbine. The unit was rated at 65kW. The Company then retrofitted the gearbox with the newly designed friction drive. In addition, a new control system was designed and installed. The control system included real time data acquisition, which provided evidence of performance. The tower and blades were refurbished.

In 2009, New World Generation discovered a company developing a proprietary polyurethane material. The material was tested and out-performed the test equipment. The coated output shafts performed as expected. 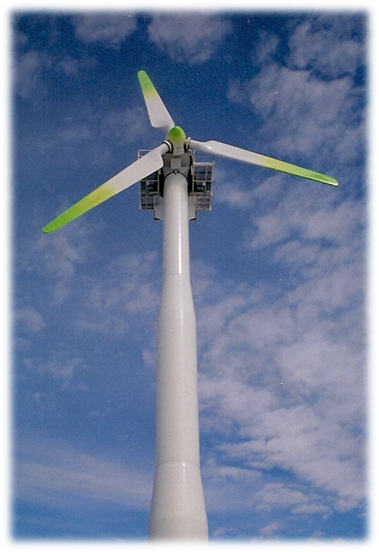